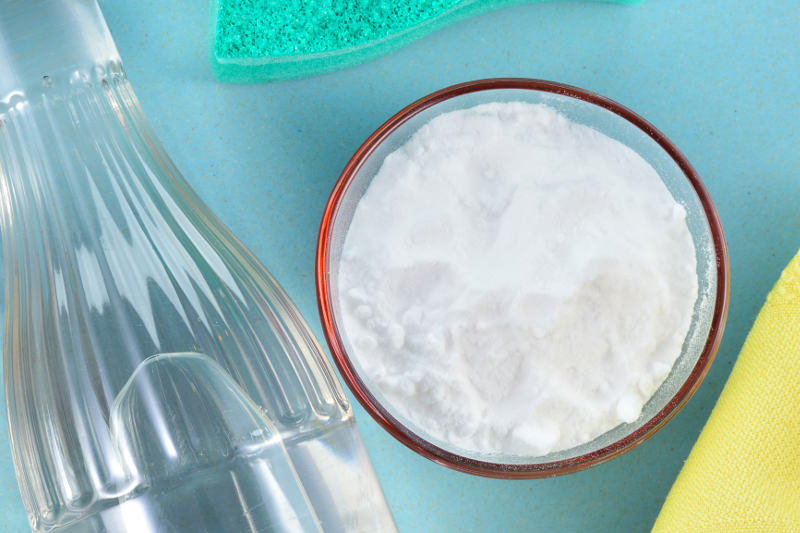 When you think of baking soda, cooking is probably the first thing that comes to mind. It’s a staple culinary product found in nearly every household; you’ve probably used it yourself in the past month. But believe it or not, it has a lot more uses than just baking.

Baking soda can help absorb odors in a room. There are quite a few ways of utilizing baking soda for odor control, and it works as a healthier substitute to harsh cleaning chemicals. You can sprinkle baking soda on the carpet and vacuum it later, or place a dish of baking soda in the room.

In the rest of this article, I’ll discuss how you can use baking soda to control unpleasant smells in a room and why you should consider this clean alternative to fragranced cleaning products. Keep reading.

How Does Baking Soda Absorb Odors?

Baking soda does absorb odors, but how does it do that?

Baking soda absorbs odors by neutralizing the bad smells. Since many common household odors are acidic, you can use baking soda, a basic compound, to tackle the bad odors for you—no need for harsh chemicals! Since baking soda is a base, it reacts with acidic odors to neutralize them.

Many sources of common odors, such as spoiled dairy products, release butyric acid, which triggers smell receptors in our noses, and baking soda neutralizes them.

However, rotting food isn’t the only source of the stink. Bacteria, mildew, and pet urine can all contribute to unfavorable odors because they release various acids with triggering smells. Baking soda works against these nasty smells since they come from acidic sources.

How to Use Baking Soda to Absorb Bad Smells

You should know what baking soda does and that it can absorb odors by now. But how can you use baking soda to fight against things in your house that stink effectively? Here are a few ways:

Sprinkle Baking Soda on Your Carpet

Carpets can easily stink. That’s because they provide a suitable environment for bacteria and mildew to grow. Sprinkling a bit of baking soda on your carpet is a great way to absorb the bad smells that might accumulate on the carpet.

This method spreads the baking soda across the entirety of your floor, making sure that the baking soda actually touches the source of the bad smells. Once you sprinkle a good amount of baking soda around the room, you can wait several hours (or overnight) for the soda to effectively absorb all of the nasty smells.

Once you’ve let the baking soda sit for a bit, you can vacuum your carpet and remove the odor from your home.

This method works best if you’re trying to rid an entire room of a smell that originates directly from your carpet or rug, so keep in mind that it might not be as effective on hardwood flooring, tile, or laminate.

However, you can only use this method for ridding your carpet of smells. If you’re concerned about mildew, make sure you take the steps to properly rid your house of mold to avoid mold exposure and the long-term health consequences it can cause.

Put Dishes of Baking Soda in the Room

Using dishes of baking soda across the house is another method for ridding a room of odor.

Try filling small dishes or bowls with a few pinches of baking soda. You can then place these dishes around your room and hide them if you’re worried about how this will affect your decor.

This method is a great way to subtly remove bad smells effectively. However, it might take longer to work than the vacuum method.

Baking soda can take anywhere from a few hours to a couple of days to absorb odors. It depends on the method of absorption you use and the intensity of the smell.

The vacuum method (carpets and rugs) only takes a few hours to be effective. But you should wait overnight for the best results.

The dish method takes a long time because the baking soda is only concentrated in one spot of the room. It might take a few days for you to notice a difference with this trick.

Use Baking Soda Instead of Traditional Fragrances

Baking soda can be so effective in getting rid of those unpleasant household smells. Besides its effectiveness, there are a few other reasons why you should use baking soda instead of typical air fresheners. Here’s why:

Baking soda is a lot cheaper than air fresheners, wall plug-ins, and candles.

For example, a two-pack of Febreze can cost around $10 and only lasts for a little bit. The effects of baking soda can last for weeks if you use it successfully.

Three-wick candles at Bath & Body Works can cost around $25, and wall plug-ins cost approximately $20 (minus the cost of refills).

However, one pound of Arm & Hammer Baking Soda (available on Amazon) is under a dollar. I recommend this baking soda because it’s all-natural and non-toxic, and it’s also kosher and gluten-free.

Most Cleaning Products and Air Fresheners Are Toxic

Believe it or not, most cleaning products and air fresheners aren’t actually “clean.”

One in three cleaning products contains harsh chemicals and toxins that can severely damage your health, leading to asthma, allergic reactions, seizures, weakened immune systems, and even cancer.

Most of the time, these chemicals aren’t listed on the label. Many are hidden in an ingredient and legal loophole called “fragrance” (also written as “perfume/parfum” or “scent”), which can contain hundreds of toxic chemicals used to enhance smell, performance, and shelf life.

A fragrance is found in many different air fresheners. However, baking soda is a clean alternative that’s a lot more effective than regular odor cover-ups.

Baking Soda Removes the Smell Instead of Covering It Up

Another benefit of baking soda is that it removes the smell; it doesn’t just cover it up.

Air fresheners are expensive and toxic, but they aren’t as effective as baking soda. This is because baking soda causes a chemical reaction with the source of the odors, while fragranced air freshening products focus on masking the bad smells rather than neutralizing them.

But baking soda gets rid of the odors because of the chemical reaction that takes place when it meets the acids released by bacteria, rotting food, mildew, and other unpleasant sources.

Baking soda is an effective method of odor removal that can help you and your home feel a lot cleaner. In addition to being practical, it’s also more affordable and less toxic than traditional air fresheners. Next time you notice a bad smell in your home, try using baking soda instead.