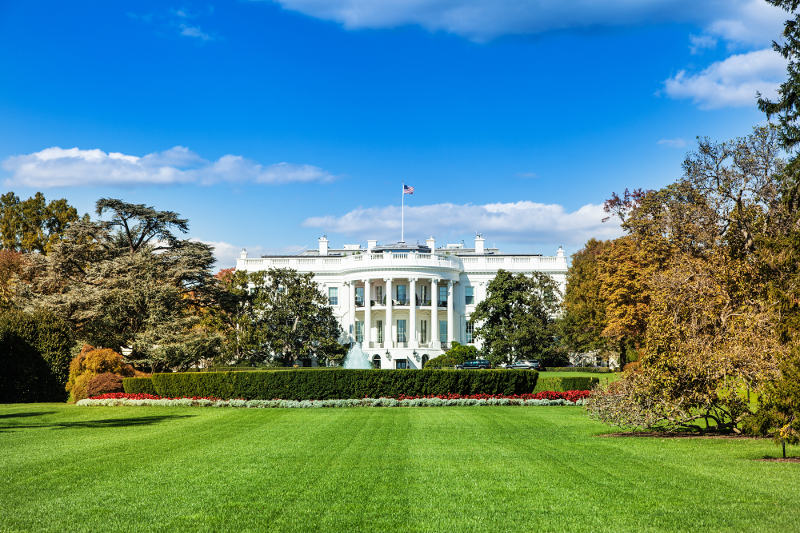 The White House is the official residence where the President of the United States lives during his term. The White House was constructed in 1792 but has undergone many renovations over the years. The original house consisted of two floors and only had eight rooms.

There are 16 bedrooms in the White House, but the mansion consists of 132 rooms and 35 bathrooms. The White House has six levels and is 55,000 sq ft (5,110 sq m). Some of the bedrooms include the Main Bedroom, where the president sleeps, and the Lincoln Bedroom and Queens Bedroom.

How Many Rooms Are in the White House?

The White House is famous worldwide. Whether you have driven past it or seen it in a movie, we all know what it looks like but do we know how many rooms, specifically bedrooms, there are in the beautiful mansion?

There are 132 rooms and 35 bathrooms in the White House. The house consists of the Executive Residence, The West Wing, The East Wing, and an underground bunker called the Presidential Emergency Operations Center.

Up to 30,000 tourists visit the White House each week, but they only get to see a tiny part of the mansion that has been made available to the public so let’s explore the mansion in more detail.

Rooms in the Executive Residence

The Executive Residence is the main part of the mansion and includes the presidential bedroom. However, there are two other sections of the White House that are used for conducting business and affairs of the state.

This part of the mansion includes the original house that was built in 1792, but it burned down and had to be rebuilt.

The second President of the United States of America, John Adams, was the first US President to live in the White House. Since then, all the presidents, including Thomas Jefferson, Abraham Lincoln, Theodore Roosevelt, and Richard Nixon, lived in the White House during their terms as President.

There are many rooms on the first floor of the Executive Residence but no bedrooms. These rooms include:

The second floor of the Executive Residence is the presidential family’s home floor, which includes several bedrooms and is where the president lives with his family. The rooms that can be found on this floor include:

The third floor of the Executive Residence has some interesting rooms, including:

It can host up to 140 people and is a beautiful room with big windows, fireplaces, and a portrait of Abraham Lincoln hanging above the mantel. Today the stateroom is used as a banquet hall and ceremonial chamber.

The presidential suite can be found on the southeast corner of the second floor and consists of the main bedroom, dressing room, two bathrooms, and a sitting room. The sitting room has previously been used as the first lady’s bedroom, as some of the presidents and their wives did not always share a bedroom.

The guest suite consists of the Lincoln bedroom and Lincoln sitting room. It was initially built as two bedrooms and a toilet and then renovated into an office in 1825. The Lincoln bedroom is named after President Abraham Lincoln who used it as an office and a cabinet room.

Some of them include:

Rooms in the West Wing

Before the west wing was built, all the offices were in the same space as the living quarters, not leaving a lot of room for a family to live. Theodore Roosevelt wanted more space as he had a big family, including his wife Edith Roosevelt and his six children.

In 1902 the construction of this section began, and since then, many additional rooms have been added. This is where most of the presidential meetings occur, and there are numerous offices for staff members.

Today the West Wing houses many rooms, which include:

The oval office was designed by Nathan C. Wyeth and completed in 1909. Its design is based on the oval shape of the blue room and is the official office of the president.

The office has four doors leading to the rose garden, a private study, the main corridor, and the president’s secretary’s office. Every president gets to redecorate the oval office throughout his term as president.

Fun theory: It is rumored that former president Trump added a Coca-Cola button that he pressed and someone would bring him either a Diet Coke or a regular Coke. But, that’s hearsay and might not be accurate.

The cabinet room is built in a Georgian style and is the official room where the president meets with his Cabinet and Heads of State. Each cabinet member has their own chair with a brass plate on the back, engraved with their name and position, which they can purchase when they leave office.

Rooms in the East Wing

The east wing only has two floors and mainly consists of offices. The first lady’s office, as well as her staff’s offices, can be found here. The Graphics and Calligraphy office can be located on this floor, as well as the White House family theater.

The east wing is built on top of the Presidential Emergency Operations Center, a bunker-like structure where the president is taken if there is an emergency.

The basement structure is an addition to the mansion added during Harry Truman’s term and has numerous rooms as well as storage space, including:

The White House has many other rooms throughout the mansion used as offices and storage. There are also a lot of rooms and areas for recreational activities that include:

You can watch this informative YouTube video showing the layout of the White House.

The White House has 16 bedrooms and 35 bathrooms but has a total of 132 rooms, including The Executive Residence, The West Wing, The East Wing, and The Basement.

The presidential living quarters are on the second floor of the Executive Residence.

The master suite consists of the master bedroom, sitting room, two bathrooms, and dressing room. The White House is enormous, with a beautifully manicured lawn and many rooms, offices, and storage space, ensuring that the president has everything he needs to run the country.